Home » Top golf courses in the Hamptons for golf aficionados

Top golf courses in the Hamptons for golf aficionados 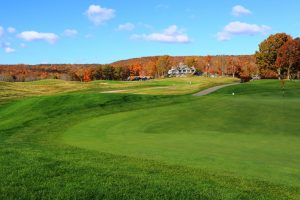 In this article, we’ll shine the spotlight on some of the best golf courses in the Hamptons, from historic public courses to newly renovated exclusive clubs, and more.

Ready to hit the greens? Here are several top-rated golf courses in the Hamptons:

Located in the village of East Hampton, Maidstone Club is a private country club boasting picture-perfect views of the Atlantic Ocean. The club was originally founded as a 7-hole course in 1894, and was the summer retreat of some of the wealthiest and most socially connected families in New York City at the time.

Maidstone Club now has a 9-hole course and 18-hole course, and was included in Golf Magazine’s list of “Top 100 Courses in the World” in 2014.

The Bridge is a private Reese Jones-designed golf course built on roughly 300 acres of land that was shaped ages ago by a melting glacier. Its course layout flows seamlessly with the landscape’s dramatic topography, highlighting the breathtaking views of the sound.

The dynamic mix of uphill, downhill and level holes encourage players to approach each hole strategically, which adds to the challenge as well as the beauty of this unique course.

The Sebonack Golf Club is home to a 300-acre golf course surrounded by serene water views of Cold Spring Pond and the Great Peconic Bay. The course hosted the US Women’s Open in 2013, which marked the first time a championship tournament was played on Long Island.

Sebonack Golf Club was opened in 2006, and was designed by Jack Nicklaus and Tom Doak.

Originally developed in 1927, Montauk Downs State Park Golf Course was redesigned in 1968 by the legendary Robert Trent Jones Sr. and his son, Rees.

Golfers at Montauk Downs can enjoy a new playing experience each time, as the ever-changing wind currents from the Atlantic Ocean and Block Island Sound create new playing conditions each day. Most of the holes in the course are surrounded by small greens, which require a precise approach over water hazards and bunkers.

Shinnecock Hills has hosted a number of prestigious golfing events, including five US Opens (a sixth is scheduled in 2026).

Consistently ranked as one of the top golf courses in the country, the 18-hole links-style golf course is known to test every club in the bag, thanks to the continual movement in its routing, small and well-guarded greens, and changing wind factor.

Looking for the best homes for sale in the Hamptons, North Fork, and the East End of Long Island? Call Kerrigan Country Realty today at 631.288.9600, or send an email to dee@kerriganrealty.com